As we celebrate the opening of the Elizabeth Line, here’s a glimpse of what to expect at Paddington. The new railway runs for over 100km from Heathrow and Reading in the west through to Shenfield and Abbey Wood in the east, serving 41 stations along the route, including 10 major new stations. The Elizabeth Line is part of the Transport for London network, with tube, DLR, overground and mainline station interchanges.

When fully open the line will increase central London’s rail capacity by 10%, bringing an additional 1.5 million people within 45 minutes of central London. 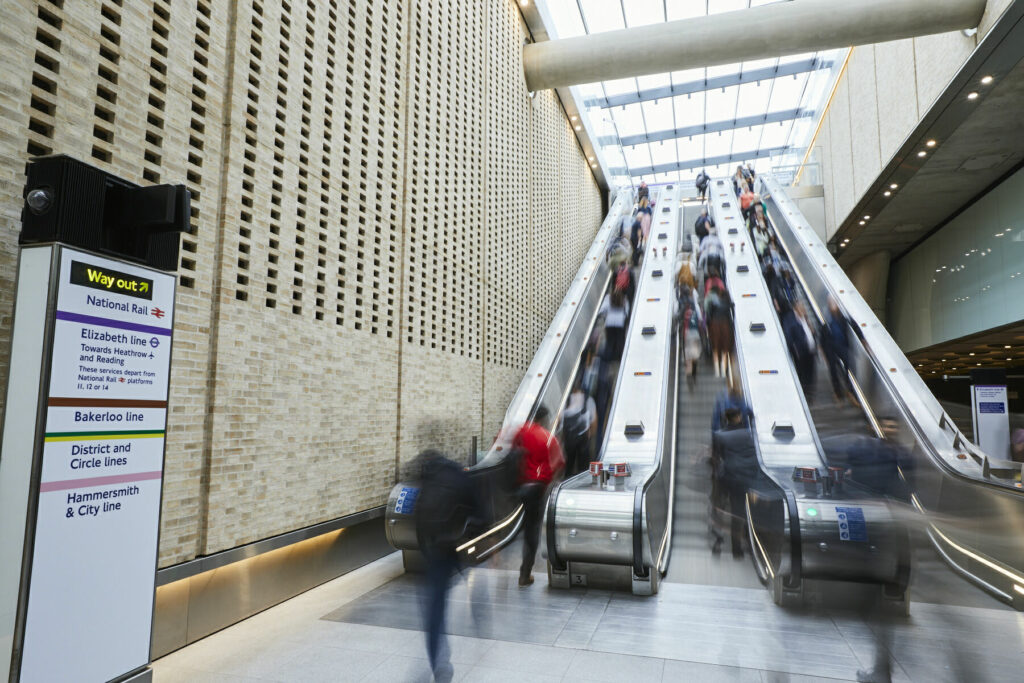 When is it opening?

The central section of the Elizabeth Line opened on Tuesday 24 May 2022.

Transport for London announced on 23 August that the next phase, involving through running, will commence on 6 November 2022. This marks the point at which the railway will run on Sundays and become two lines, running directly from Reading in the west to Abbey Wood in the east, without having to change at Paddington, and from Shenfield in the east to Paddington, without having to change at Liverpool Street. At peak times 24 trains will run per hour on the central section between Paddington and Whitechapel. 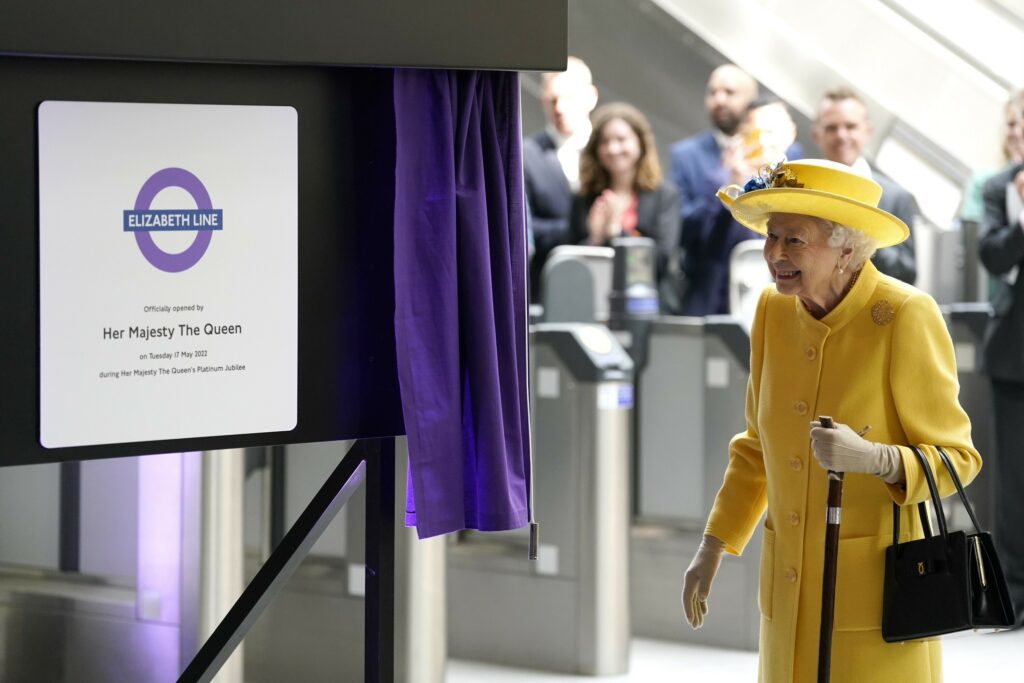 Her Majesty the Queen unveils a plaque at Paddington Station to mark the completion of the Elizabeth line.

Initially the Elizabeth Line will operate as three separate lines, with passengers changing at Paddington and Liverpool Street.

Services to Paddington and from Liverpool Street to Shenfield branded TfL Rail have become the Elizabeth Line. Bond Street is expected to open in the autumn. The central section will cover Paddington to Abbey Wood. To go further east or west of these points passengers will have to change at Paddington for the west and Liverpool Street for the east. There will be 12 trains per hour in this central section at this stage.

Transport for London announced on 23 August that the next phase, involving through running, will commence on 6 November 2022. This marks the point at which the railway will run on Sundays and become two lines, running directly from Reading in the west to Abbey Wood in the east, without having to change at Paddington, and from Shenfield in the east to Paddington, without having to change at Liverpool Street. At peak times 24 trains will run per hour on the central section between Paddington and Whitechapel. Bond Street station will also be open by this date.

Ahead of the autumn changes, from Monday 5 September, extended opening hours will run on the Elizabeth line between Paddington and Abbey Wood from around 05:30 to around 23:00. 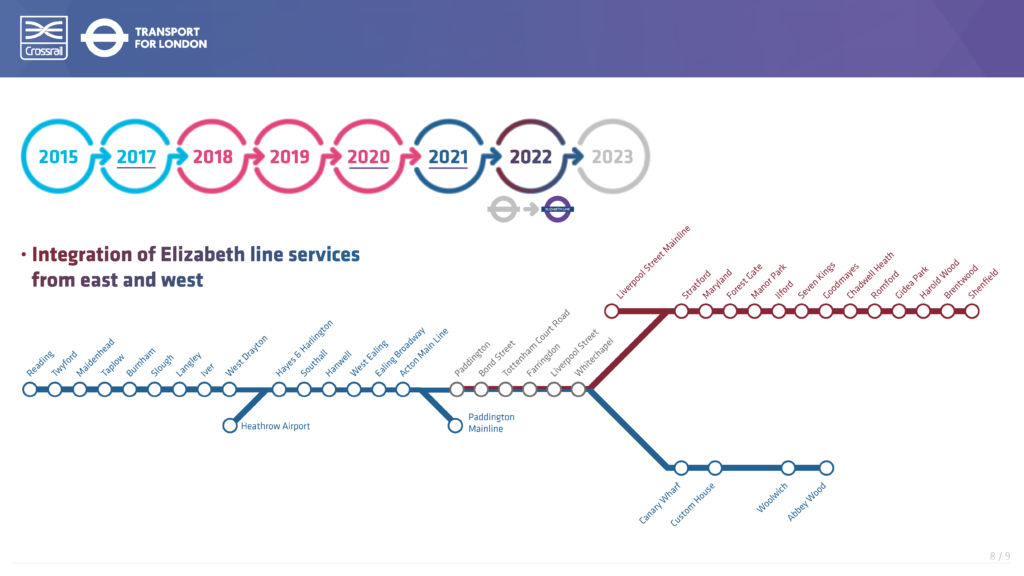 The third and final stage will see a fully integrated railway and timetable, across the entire Elizabeth Line. This will be no later than May 2023. 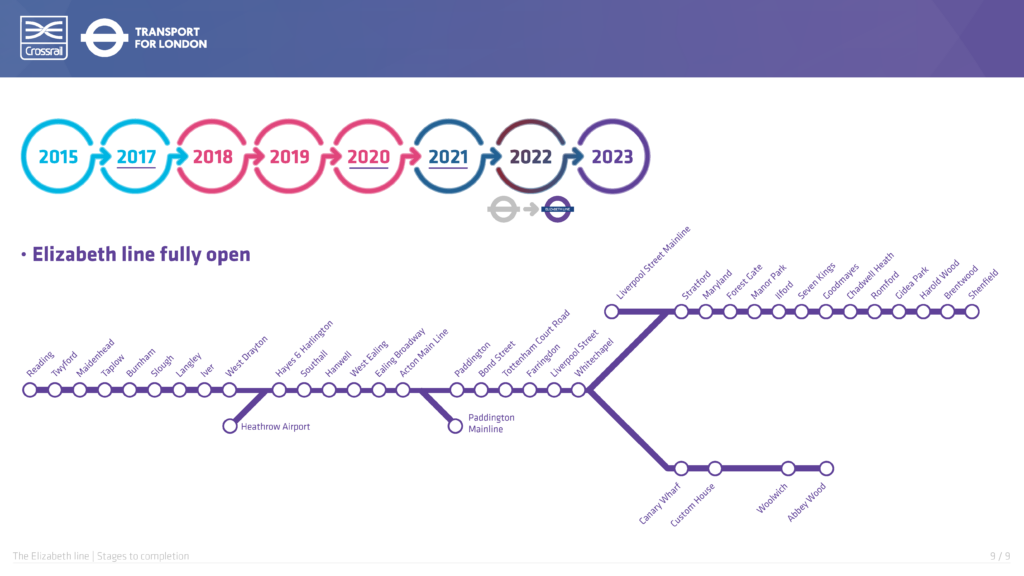 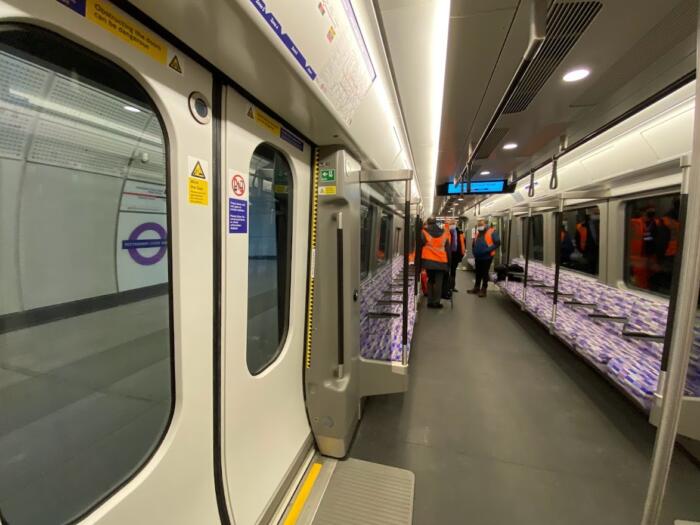 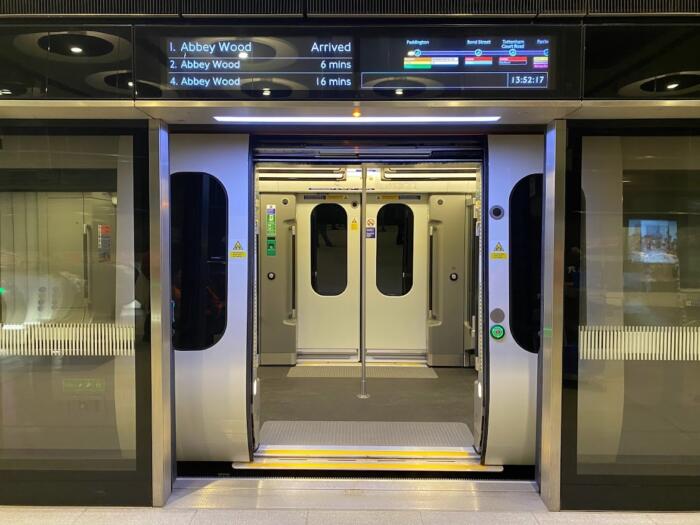 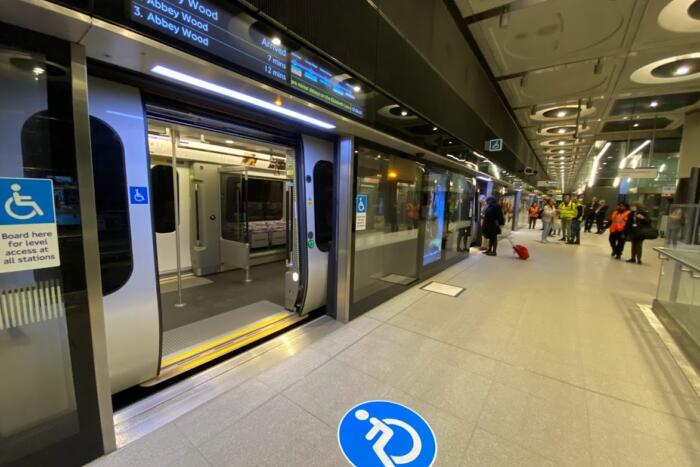 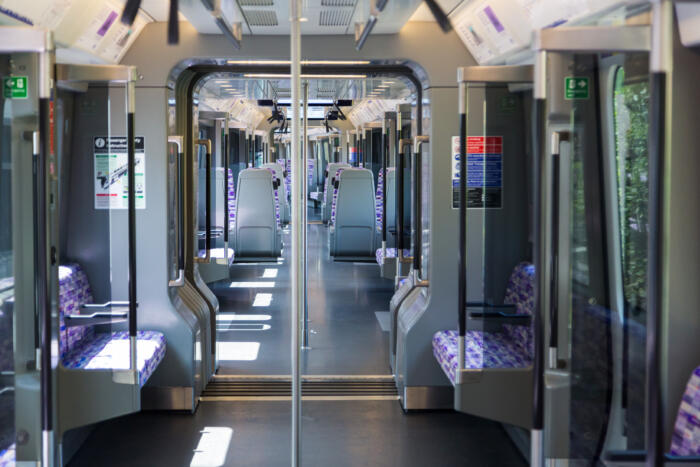 Each of the 10 new stations on the Elizabeth Line takes its cue from its surrounding environment and at Paddington you will see nods to the work of Isambard Kingdom Brunel and Matthew Digby Wyatt, creators of Paddington’s Grade 1 listed mainline station. A 10-foot grid pattern echoes Brunel’s engineering heritage. Circular lights the shape of lily pads are inspired by Wyatt’s geometric designs. 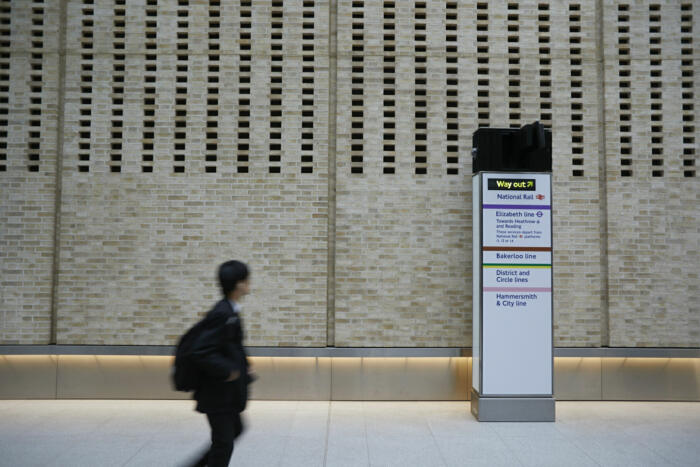 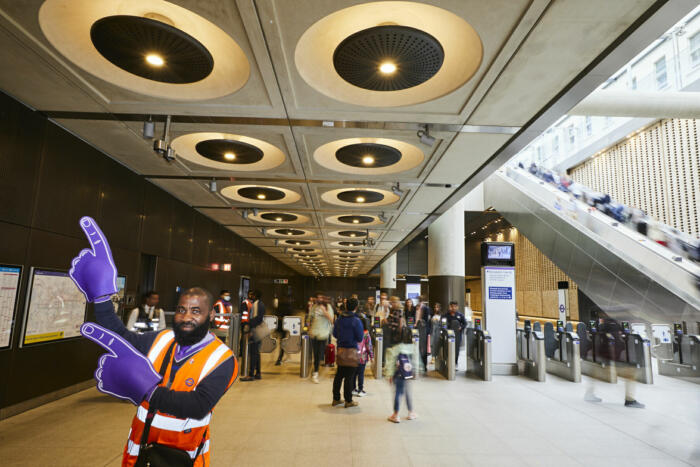 A 90-metre opening leads down into the station, which is spacious enough to accommodate the Shard on its side, or three Wembley Stadiums. 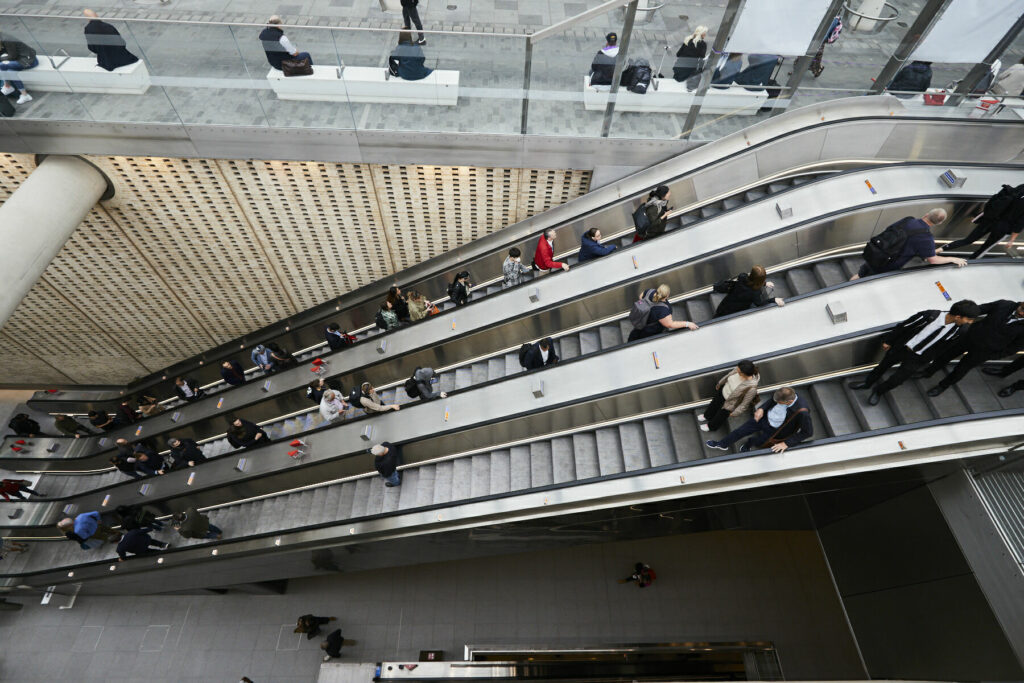 Above the station a 120-metre long glass canopy sits 10 metres above ground, spilling natural light into the station and even down to platform level below. In keeping with Crossrail’s ambition of bringing breath-taking art into every new station, the canopy is decorated to mimic the sky, featuring every type of cloud. Spencer Finch’s Cloud Index presents 27 different types of cloud within a single composition. The drawings were scanned and then printed onto 180 clear glass panels (each 2 metres x 6 metres) and installed in the canopy of the station. 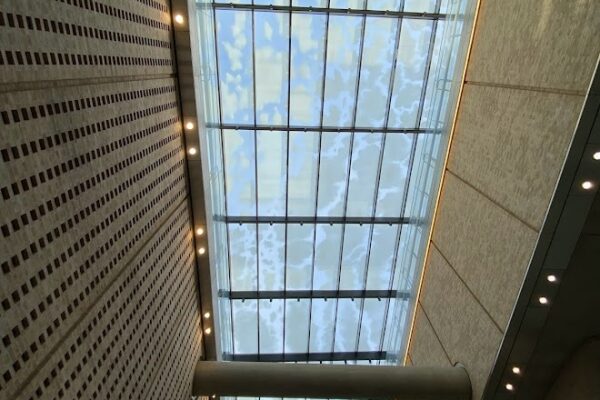 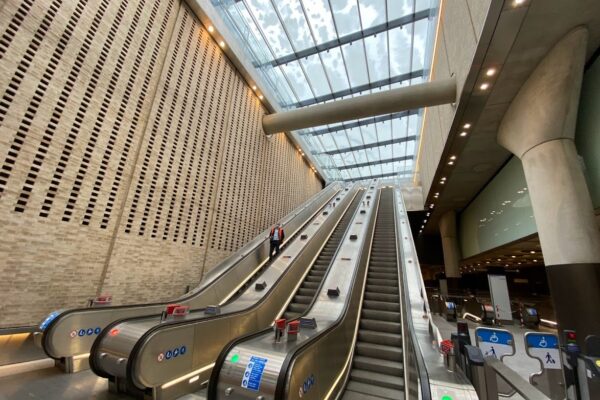 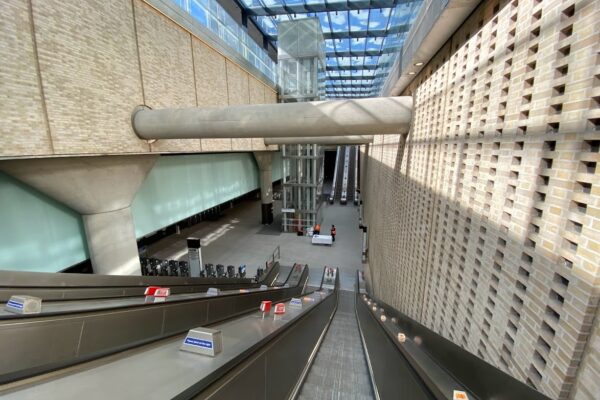 Entrances can be found on Eastbourne Terrace, and in three places along Paddington Station’s western flank, parallel to platform 1. Each end of the Elizabeth Line station leads to street level, to the north at Bishop’s Bridge Road and to the south at Praed Street. 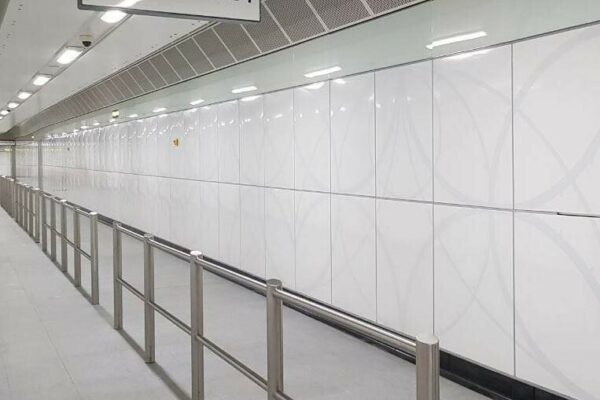 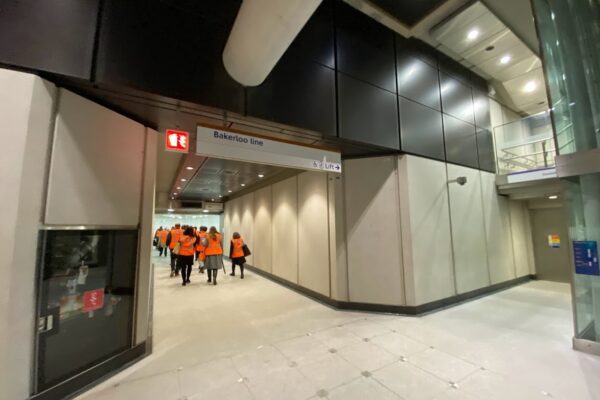 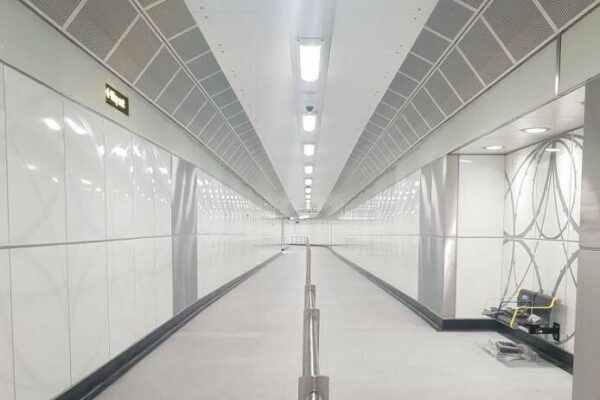 Paddington to Tottenham Court Road in five minutes, to Farringdon in nine minutes, to Liverpool Street in 11 minutes and Canary Wharf is an impressive 18 minutes. Oysters at the ready! 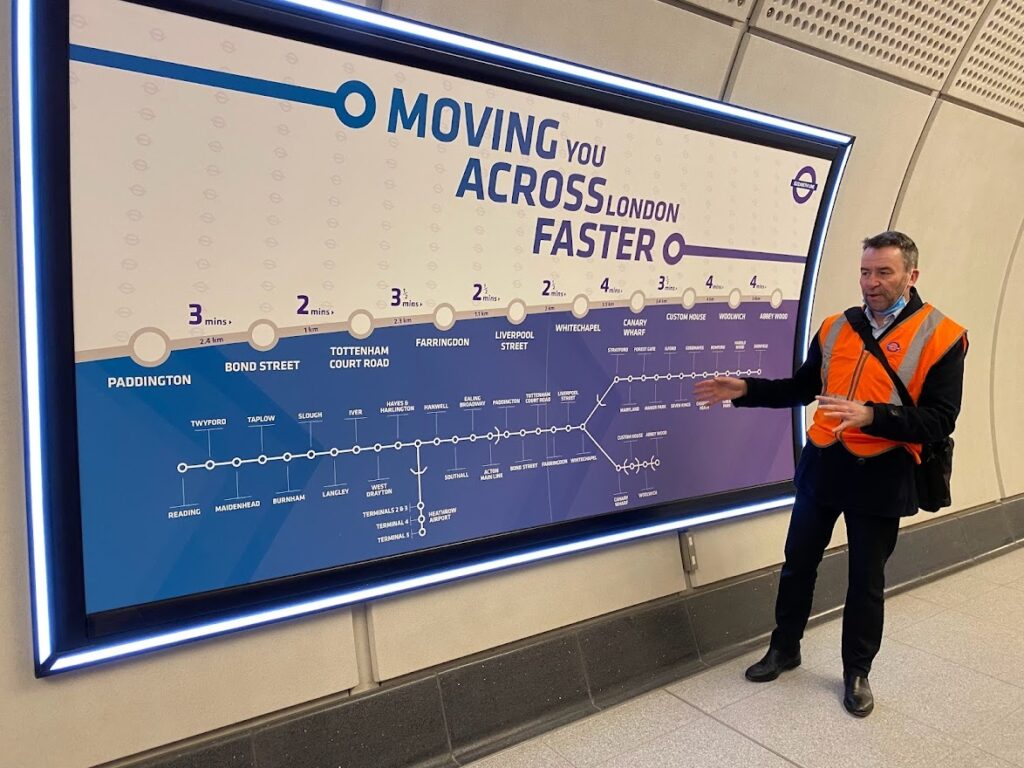 Arriving at Paddington's Elizabeth Line station passengers have a number of options to reach their destination:

For onward journeys on foot within Paddington, passengers are encouraged to exit the Elizabeth Line station and head north towards Bishop's Bridge Road for Paddington Central. For Canalside Walk and Merchant Square walking times through the mainline station might be quicker, and use the canalside exit next to the Hammersmith and City Line.

For Sussex Gardens, Connaught Village and routes through to the West End, head south from the Elizabeth Line station towards Praed Street.

A sneak peek of other Elizabeth Line stations

Before passengers arrive, take a look at some of the other stations on the central section. Farringdon on the left, Tottenham Court Road on the right. 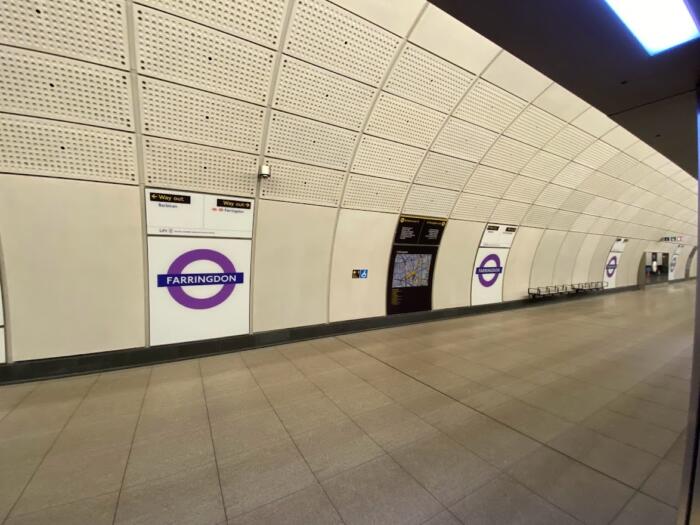 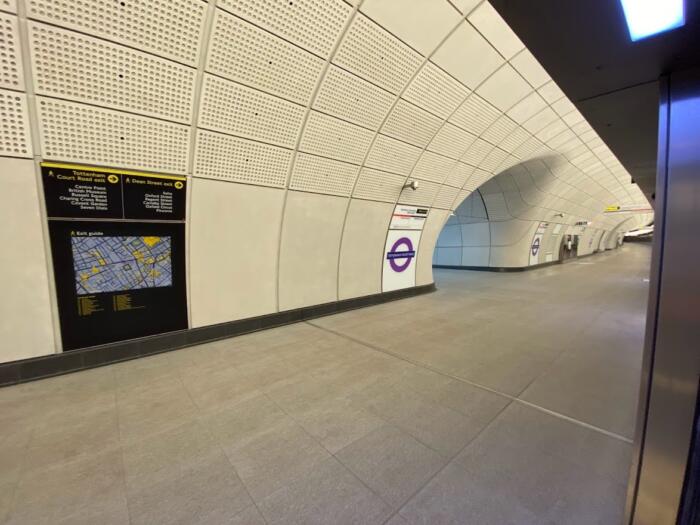 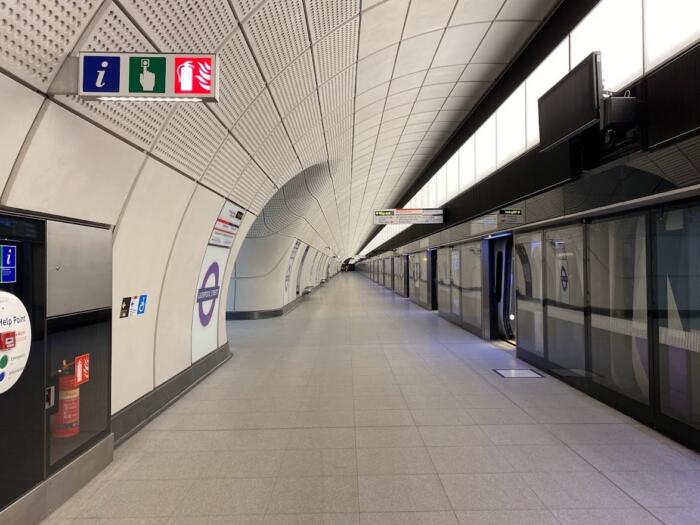 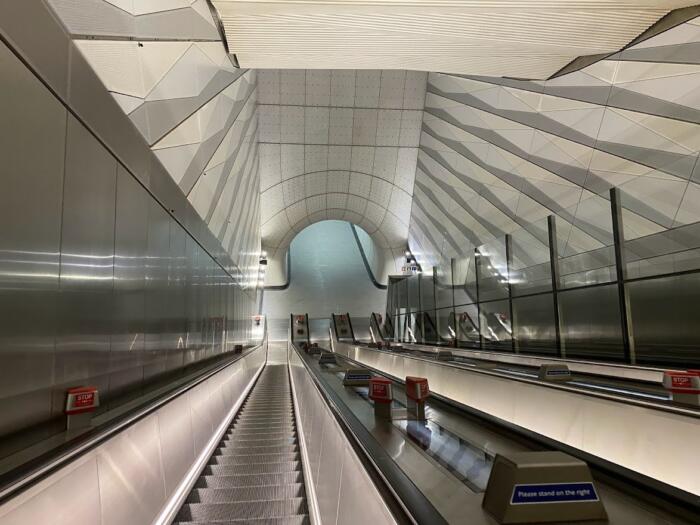 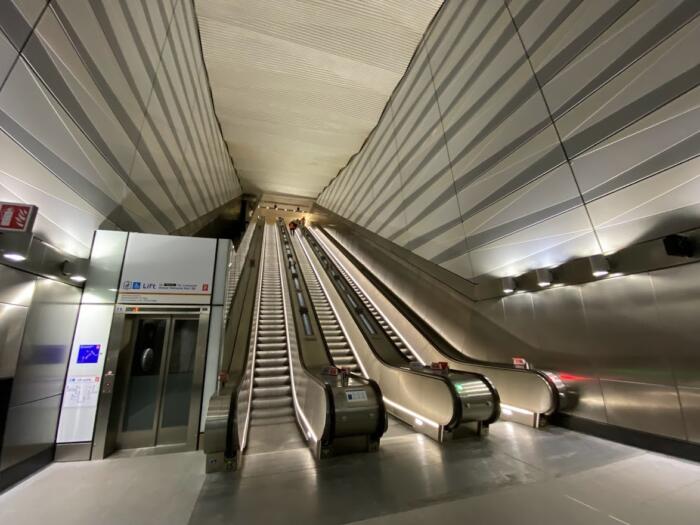 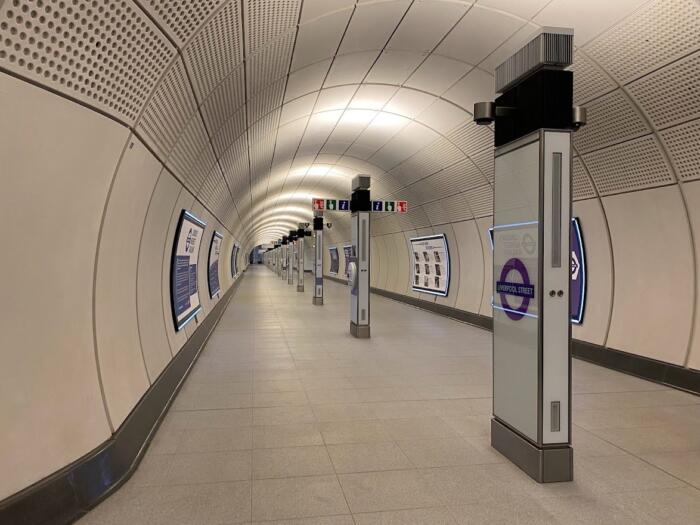 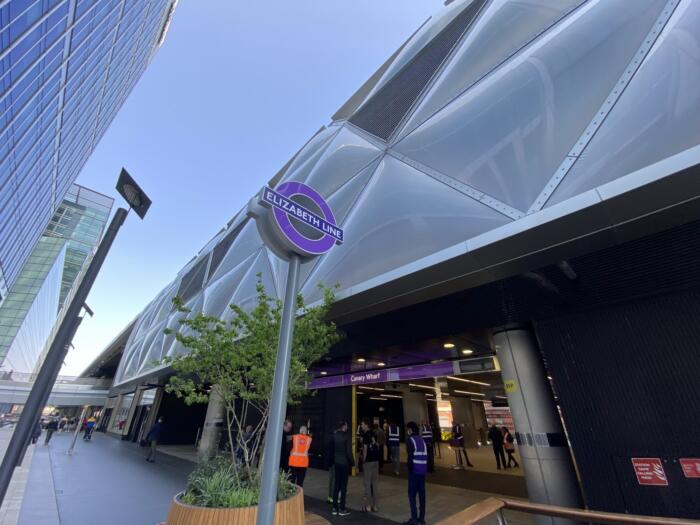 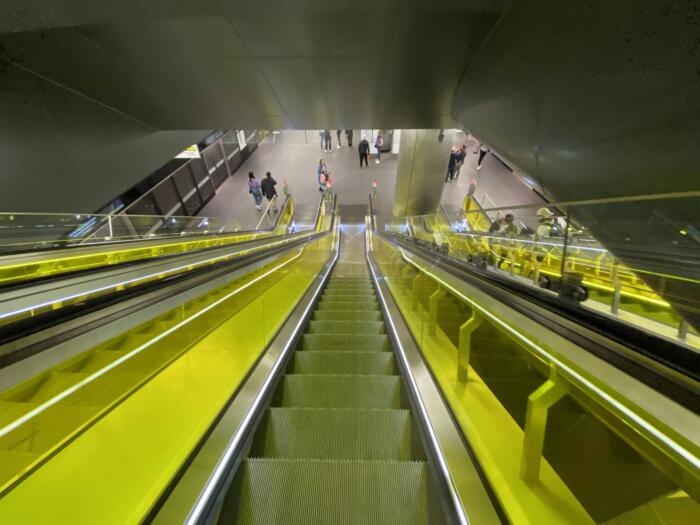 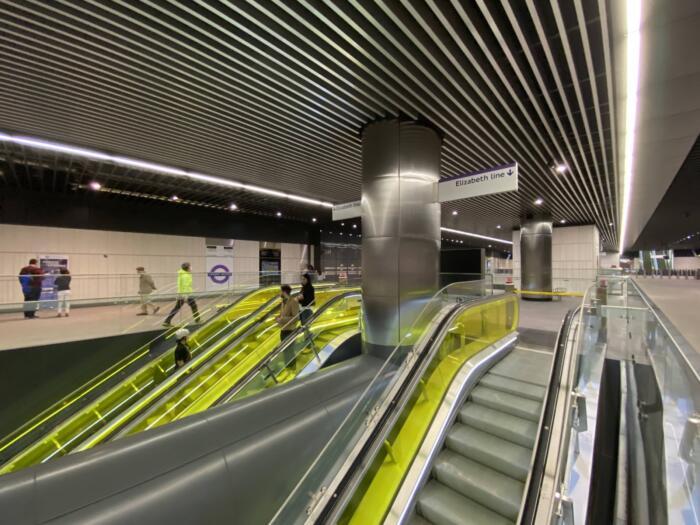 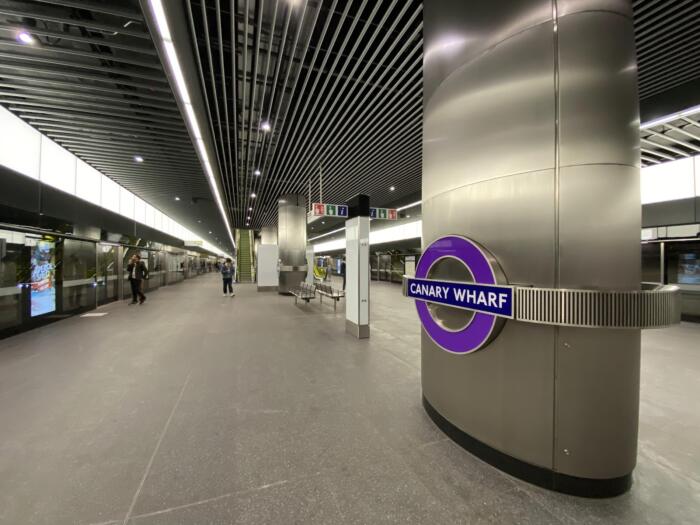 Crossrail Paddington contractors Costain Skanska Joint Venture has excavated down to the new Crossrail tunnels, breaking into the top of the tunnels 16 metres below ground level, as part of construction of the new station.
Read more
News

September 2014
Remains of structures built by celebrated engineer Isambard Kingdom Brunel for his Great Western Railway were unearthed by Crossrail near Paddington in April 2014.
Read more